I’m out of town today so I am phoning in my blog. Okay it is really more of a commercial but I have been working hard to bring you a new series in May (which is going to be awesome) and I needed a day off. There is still a gift card to be had so bear with me and continue down to the bottom of the page. 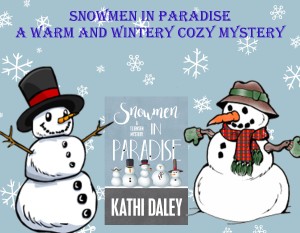 Snowmen in Paradise is on sale this week which doesn’t often occur since Henery Press doesn’t put their books on sale as frequently as I put my self published work on sale. If you haven’t read it yet it is a fun wintery read. In Snowmen in Paradise Winter Carnival comes to Serenity, and with it Tj finds her schedule busier than ever. Not only is her ski and snowboard team heavily involved in demonstrations and local competitions, but her ragtag choir is about to debut in their first live performance. To make matters even more complicated, someone has killed Travis Davidson, a town favorite son, world-class snowboarder, and Olympic hopeful. Tj is determined not to get involved in the subsequent investigation until she learns the prime suspect is Chelsea Hanson, her high school boyfriend Hunter Hanson’s sister.

Although there’s no shortage of Sereninites with a grudge against the hometown hero, even Tj has to admit there’s good cause to suspect Chelsea of the murder. Balancing bridesmaid duties, Winter Carnival obligations, show choir duty, and after-hours investigation, Tj sets out to prove Chelsea innocent.

So what is coming next for the gang from Paradise lake? Can anyone say vacation? Of course this vacation ends up featuring a murder to solve in this cozy island mystery.

Tj Jensen and her family head to Turtle Cove Resort for summer vacation, but their plans for rest and relaxation are thwarted when they find a dead treasure hunter in the attic of the resort’s main house. Initially vowing not to get involved, Tj quickly changes her tune when the Gull Island deputy on the case closes it after a bare bones investigation. All evidence points to foul play, and Tj’s determined to uncover what the deputy wants to keep hidden. With the help of her best friend and a chatty parrot, Tj digs up a centuries old legend, a hidden map, and secrets buried deeper than pirate’s treasure.

You can preorder today: