I try not to use this blog to promo my books but I’m really excited about this one and I want to tell you about it since it publishes on Sunday.

As the name would hint at, The Cat of Christmas Past is sort of a takeoff of A Christmas Carol. The plot doesn’t actually follow the plot of A Christmas Carol, but you will see a similarity in the names used and the overall theme. I took a bit of a chance with this book since it does not actually feature a murder and I know there are mystery purists out there who will insist that you have to have a murder.

The book features a miserly old man named Balthazar Pottage who has issued eviction notices to the 12 families living in one of the apartment buildings he owns just weeks before Christmas. Cait makes it her mission to save the apartment building but Balthazar is known for being the meanest, most miserly, man in the area. Getting him to change his mind won’t be easy. In fact, she considers the task to be close to impossible, until a cat named Ebenezer comes calling and Cait knows that she has just received the Christmas miracle she is going to need.

Cait attempts to befriend the man in the hope of talking him into sparing the building, but the man, unfortunately isn’t all that interested in friendship. There is one thing however, that the old man is willing to trade for the apartments. The problem is that the thing that the man wants is most likely impossible to deliver.

This is an excerpt from the book:

I frowned. “How about if I continue to read to you? I can come back every Monday.”

“I would enjoy that, but we’re talking about more than a hundred thousand dollars,” Pottage pointed out.

I guess the man had a point.

“Although, there is something else you can do for me that might be worth that amount of money.”

“You can help me find out what became of my son.”

I hesitated. Find his son? Was he kidding? He had a serious look on his face, so I had to assume he was serious in making his request.

“You want me to find your son?” I asked. “He’s been missing for a very long time. How am I supposed to find him?”

“I have no idea, but Ebenezer seems to think you’re the one to help us. In fact, he’s quite insistent on it. Will you do it?”

I looked at the cat and hesitated. It did seem that we were linked in some way, and cats had helped me solve mysteries equally as impossible as this in the past. “If I help you figure out what happened to your son you’ll let the tenants stay?”

To find out the answer to that question you will have to read the book.

Now for the giveaway. I am going to give away a Cat of Christmas Past Tote this week. To be entered to win simply comment below. I will pick a winner on Sunday. The winner will be announced my main Facebook page – http://www.facebook.com/kathidaleybooks 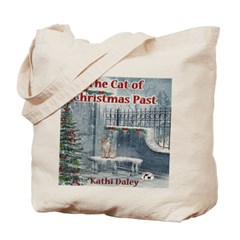 94 thoughts on “The Cat Of Christmas Past”